The Declaration of Rights 1688

Below is a Line-by-Line Transcription of The Original Document 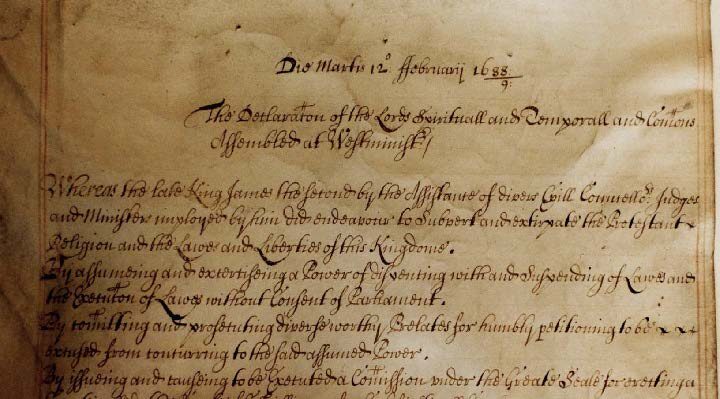 This Picture is of the top of the Declaration of Rights. This is the actual document that was read to Prince William of Orange and Princess Mary. It is on the strength of this settlement that the Crown passed to William and Mary on the 13th of February 1688. They became King and Queen. There was a Coronation on the 11th of April 1689.(Julian Calendar Year change 25th March).

(All reproduced with the kind permission of the House of Lords records office.)

The picture below is a close up of the top right hand of the Declaration of Rights. It is interesting to note the cross style character, used at the right margin to infill the space, so that words could not be added. The title shows the date in Latin. The year 1688 is in the style of a fraction to denote the year 1688 to 1689. The spelling of ‘Comons’ with just one ‘m’ is acknowledged by the cross style character, presumably this spelling was preferred rather than crossing the right hand margin. 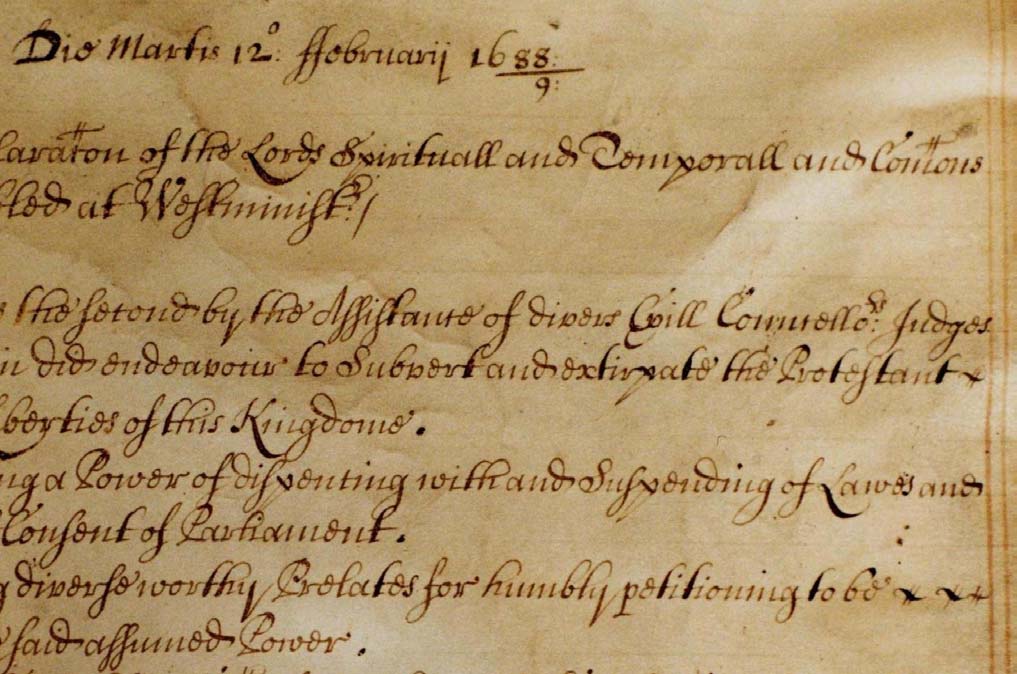 This picture shows the engrossment of the 12th of February and the clerk Joe Browne, the parliamentary clerk’s signature, at the bottom of the Declaration. The top of William and Mary’s answer is just visible.

The Declaration of Rights

Day Tuesday 12 Febuary1688:/9:
The Declaration of the Lords Spiritual and Temporall and Comons
Assembled at Westminster:

Whereas the late King James the Second, by the assistance of divers evil counsellors, judges,
and ministers employed by him, did endeavour to subvert and extirpate the Protestant
religion and the laws and liberties of the kingdom.
By assuming and exercising a power of dispensing with and suspending of laws, and
the execution of laws, without the consent of parliament.
By committing and prosecuting divers worthy prelates for humbly petitioning to be
excused concurring to the said assumed power.
By issuing and causing to be executed a commission under the Great Seal for erecting a
court called the Court of Commissioners for Ecclesiastical Causes.
By levying money for and to the use of the Crown by pretence of prerogative, for other time
and in other manner than the same was granted by Parliament.
By raising and keeping a standing army within this kingdom in time of peace without
the consent of parliament and quartering soldiers contrary to law.
By causing several good subjects, being Protestants, to be disarmed at the same time when
papists were both armed and employed contrary to law.
By violating the freedom of election by members to serve in parliament.
By prosecutions in the Court of King’s Bench for matters and causes cognizable only in
Parliament and by divers other arbitrary and illegal courses.
And whereas of late years partial corrupt and unqualified persons have been returned and
served on juries in trials and particularly divers jurors in trials for high treason which
were not freeholders.
And excessive bail hath been required of persons committed in criminal cases, to elude the
benefit of laws made for the liberty of the subjects.
And excessive fines have been imposed;
and illegal and cruel punishments inflicted.
And several grants and promises made of fines and forfeitures, before any conviction or
judgement against the persons, upon whom the same were to be levyed.
All which are utterly and directly contrary to the known laws and statutes and freedom
of this Realme.
And whereas the said late King James the Second having abdicated the government and
the throne being thereby vacant:
His Highness the Prince of Orange (whom it hath pleased Almighty God to make the glorious
instrument of delivering this kingdom from popery and arbitrary power) did (by the advice
of the lords spiritual and temporal, and divers principal persons of the Comons) cause letters
to be written to the lords spiritual and temporal, being Protestants; and other letters to the
several counties cities universities boroughs and Cinque Ports for the choosing of such
persons to represent them as were of right to be sent to parliament to meet and sit at
Westminster upon the two and twentieth day of January in the year 1688 in order to
such an establishment as that their religion laws and liberties might not again be in
danger of being subverted.
Upon which letters elections having been accordingly made.
And thereupon the said lords spiritual and temporal and Comons pursuant to their
respective letters and elections being now assembled in a full and free representative of this
nation taking into their most serious consideration the best means for attaining the ends
afore said do in the first place (as their ancestors in like case have usually done) for the
vindicating and asserting their ancient rights and liberties, declare:
That the pretended power of suspending of laws, or the execution of laws, by regal
authority, without consent of parliament, is illegal.
That the pretended power of dispensing with laws, or the execution of laws, by regal
authority, as it hath been assumed and exercised of late, is illegal.
That the commission for erecting the late Courts of Commissioners for Ecclesiastical Causes and
all other comissions and courts of like nature are illegal and pernicious.
That levying money for or to the use of the Crown, by pretence of prerogative, without
grant of parliament, for longer time, or in other manner than the same is, or shall be granted,
is illegal.
That it is the right of the subjects to petition the King, and all commitments and prosecutions
for such petitioning are illegal.
That the raising or keeping a standing army within the kingdom in time of peace, unless
it be with consent of parliament, is against law.
That the subjects which are Protestants may have arms for their defence suitable to
their condition and as allowed by law.
That election of members of parliament ought to be free.

That the freedom of speech and debates or proceedings in parliament ought not to be impeached
or questioned in any court or place out of parliament.
That excessive bail ought not to be required, nor excessive fines imposed; nor cruel and
unusual punishments inflicted.
That jurors ought to be duly impannelled and returned, and jurors which pass upon men in
trials for high treason ought to be freeholders.
That all grants and promises of fines and forfeitures of particular persons before conviction are
illegal and void.
And that for redress of all grievances, and for the amending, strengthening and preserving
of the laws, parliaments ought to be held frequently.
And they do claim, demand, and insist upon all and singular the premisses, as their
undoubted rights and liberties; and that no declarations judgements, doings or proceedings,
to the prejudice of the people in any of the said premisses, ought in any wise to be drawn
hereafter into consequent or example.
To which demands of their rights they are particularly encouraged by the declaration of His
Highness the Prince of Orange, as being the only means for obtaining a full redress and
remedy therein.
Having therefore an entire confidence that his said Highness the Prince of Orange will
perfect the deliverance so far advanced by him, and will still preserve them from the
violation of their rights, which they have here asserted, and from all other attempts upon
their religion, rights and liberties.
The said Lords Spiritual and Temporal, and Comons, assembled at Westminster do
resolve, That William and Mary, Prince and Princess of Orange be, and
be declared, King and Queen of England, France, and Ireland, and the dominions
thereunto belonging, to hold the Crown and royal dignity of the said kingdoms and
dominions to them the said Prince and Princess during their lives, and the life of the
survivor of them; and that the sole and full exercise of regal power be only in, and
executed by the said Prince of Orange, in the names of the said Prince and Princess, during their
joint lives; and after their deceases, the said Crown and royal dignity of the said Kingdoms
and dominions to be to the heirs of the body of the said Princess; and for default of such issue
to the Princess of Anne of Denmark and the heirs of her body; and for default of such issue
to the heirs of the body of the said Prince of Orange.
And the said Lords Spiritual and Temporal and the Comons do pray the said Prince and
Princess to accept the same accordingly.
And that the oaths Hereafter mentioned be taken by all persons of whom the oaths of
allegiance and supremacy might be required by Law instead of them. And that the said
Oaths of allegiance and supremacy be abrogated.
I A.B. do sincerely promise and swear that I will be faithful and bear true allegiance to
their majesties King William and Queen Mary. So Help me God.
I A.B. Do swear that I do from my Heart Abhor detest and abjure as impious and heretical
this damnable doctrine and position, that princes excommunicated or deprived by the Pope or
any authority of the see of Rome may be deposed or murdered by their subjects or any other
whatsoever. And I do declare that no foreign prince person prelate, state or potentate
hath or ought to have any jurisdiction power superiority pre-eminence or authority
ecclesiastical or spiritual within this realm. So help me God.
It is ordered by the Lords Spiritual and Temporal and Comons now assembled at
Westminster that this Declaration be ingrossed in Parliament and inrolled amongst the rolls
of Parliament and Recorded in Chancery.

Day Friday 15 February 1688
His Majesties Gracious answer to the Declaration of both houses.

My Lords and Gentlemen.
This is certainly the greatest proof of the trust that you have in us that can be given which is the
thing that maketh us value it the more and we thankfully accept what you have offered.
And as I had no other intention of coming hither than to preserve your Religion, Laws and
Liberties so you may be sure that I shall endeavour to support them and shall be willing to concur in
anything that shall be for the good of the kingdom and to do all that is in my power to advance the
welfare and glory of the nation.

Note that the third skin is trimmed as only a short length was required.

The Picture shows the end of the Declaration of Rights including the Prince of Orange’s answer and the engrossment on the third skin. The stitched joint holding the third skin to the roll can be seen. 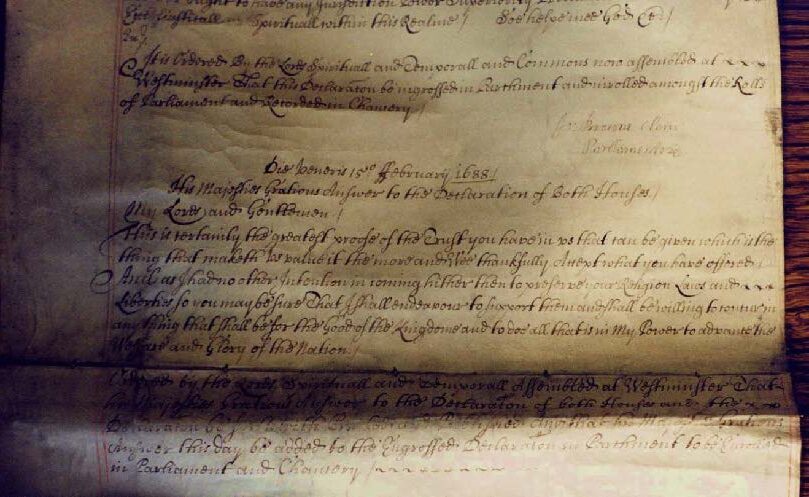